International texts by Per Herngren 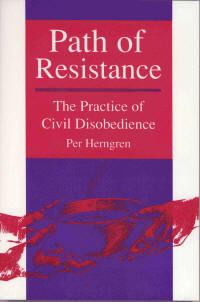 This book is the product of its author’s reflections on and research into his and others’ experiences in peace movement activities in Scandinavia, the U.S. and elsewhere. Herngren is a sociologically-trained Swede, and above all a lifelong peace movement activist. In the U.S., in consequence of participating with others in a Plowshares missile-disarming action in 1984, and after being convicted, he served 18 months (mostly) in Danbury prison. In Sweden he was one of the organizers of Swedish Plowshares, which has mounted a series of actions against Swedish weapons exports mainly (by Bofors) and continued development of the JAS 39 Gripen high-tech fighter plane by Saab-Scania. The most important of these, and certainly the largest action ever mounted by Plowshares, was a four-weeklong “peace camp” at the Saab-Scania compound near Linkoping attempting to shut down further development of JAS, in which hundreds participated. Along with his own engagement in the peace movement, Herngren has worked over several years assembling accounts of the experiences of others, particularly but not exclusively, those engaging in civil disobedience. He knows whereof he speaks, and is as qualified as anyone to take on the subject. Path of Resistance is technically a manual detailing how to do civil resistance, but one that goes well beyond others in its scope, objectivity and critical perspective. Herngren says that his purpose was “to get recent experience in nonviolence down on paper” (p. 3). I think the book will be very useful not only for those engaged in civil disobedience along with other movement people, but for a great many others, as well. The bulk of it is a very practical and detailed account of when and how to do civil disobedience, along with plenty of real-life accounts, particularly having to do with Plowshares and the sanctuary movement. There are detailed, critical-minded discussions of affinity groups, problems of security, the various kinds of actions (among them camps, destruction of weapons, sabotage, and monkeywrenching), how to manage the trial and punishment, and more. In all this there are no sacred cows and no hallowed beliefs or practices. To mention just one example, Herngren professes astonishment at the widespread mounting of blockades, and goes on to present a solid critique.

Most fundamental, if resistance is to be mounted effectively and in accord with these stipulations, it must be grounded democratically. For Herngren, democracy “is based on the assumption that all parties involved come to an agreement, and “resistance should be based on the conditions for democracy” (p.12), as much a Swedish doctrine as one of recent participatory democracy. I will not here attempt to relate the ways in which this conception informs the details of Herngren’s discussion, but only say that, to my mind, it is generally well argued and convincing.